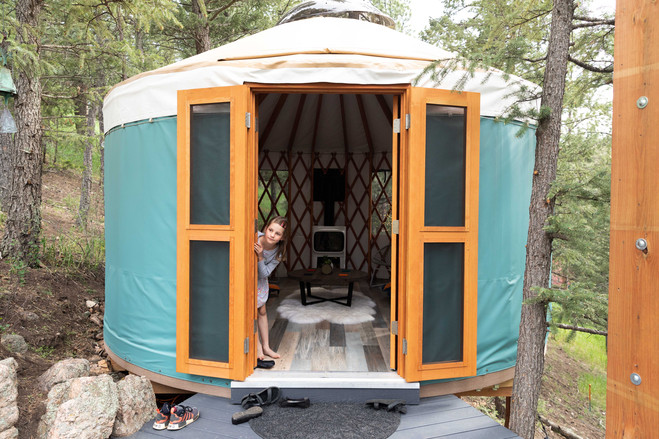 There are tents, and then there is David Maren’s yurt. A furnished, 16-foot structure that sits atop a lush mountainside in Evergreen, CO. Dave, who is Spire’s Senior Vice President, was recently featured in the Wall Street Journal after a video  of him surfaced online. Below is an excerpt from the article:

David Maren, senior vice president at Spire Digital, a software-development firm based in Denver, bought a 16-foot yurt for about $14,000, including delivery, in 2018 from the Colorado Yurt Co. for his home in Evergreen, Colo. He easily secured a permit for an accessory structure.

The yurt is set on an elevated platform that is wedged in a stand of pine trees. Elk, black bears and other wildlife frequently pass by.

“I started imagining what it would be like to have family sleepovers in the yurt and hear the elk bugling and the mountain lions,” said Mr. Maren, 46, and the father of two young children with his wife, Courtney Maren, 45.

Along with big windows, french doors and a tinted dome skylight, the insulated yurt has structural reinforcements that enable it to withstand 5 feet of snow on its roof.

A Norwegian Jotul natural-gas stove, which operates on a thermostat, keeps it snug, and a pair of 85-foot zip lines that run between the yurt and the deck of the Marens’ house make it accessible even in heavy snow. The total cost of the outdoor retreat—including a 500-gallon hot tub and a Pyro Tower oven for smoking salmon and baking pizzas—was more than
$46,000, Mr. Maren said. “We set the goal of spending one night of every week in the yurt as a family—to get away from screen time,” he said.

The yurt, however, does have electricity, a cable-TV hookup and high-speed internet. Mr. Maren sometimes uses it as a home office.

“We just closed a $5 million deal from the yurt,” he said.